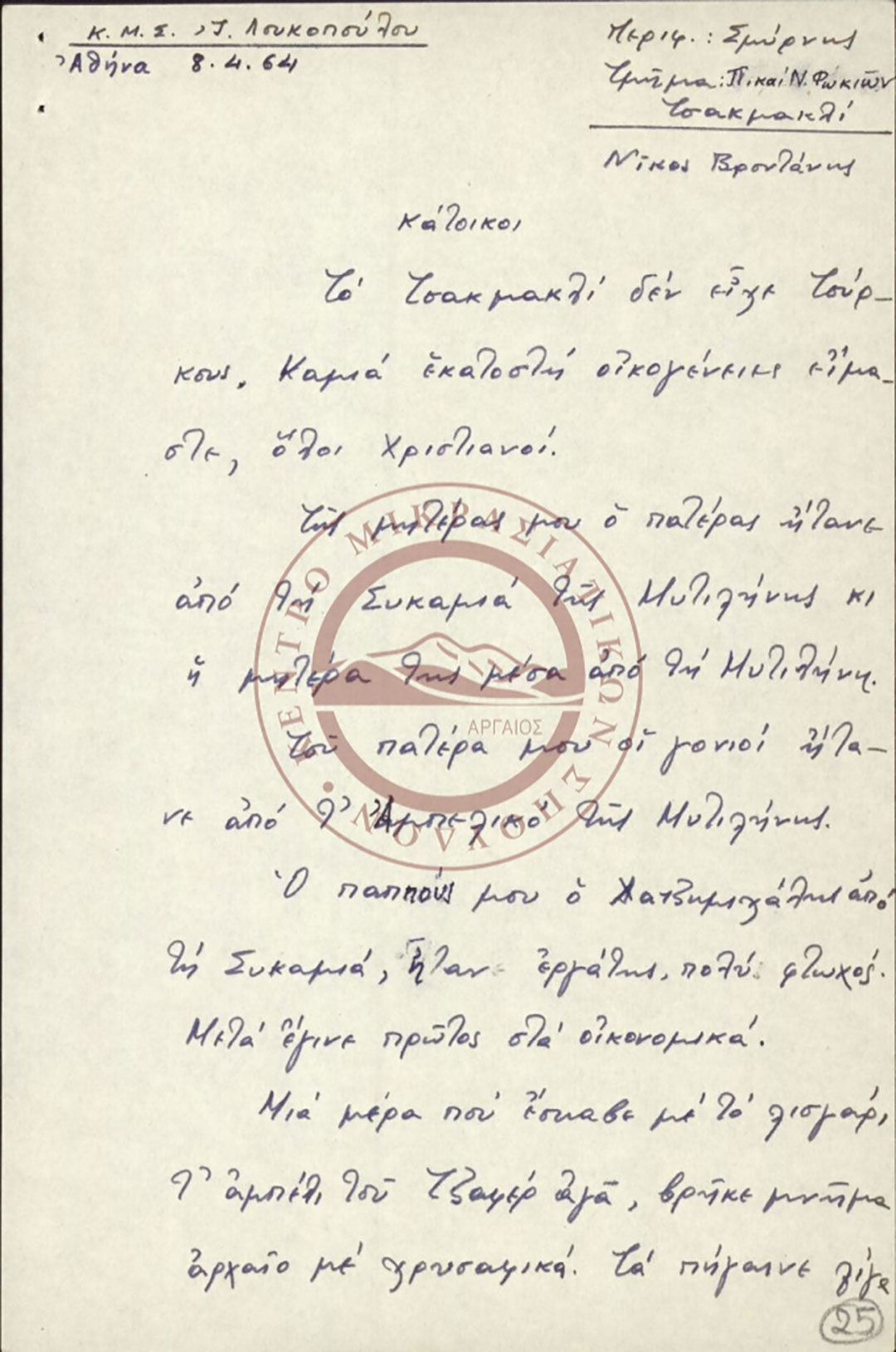 To the North, after Ayios Nikolas, lay ancient Kymi. We called it “Amourtis”. Amourtis was about ¾ to an hour away from Çakmaklı. Those who owned fields there, whenever they ploughed, they found clay pots filled with coins. Barba-Theodossis once found a clay duck, all-coloured.But Ballatzis found out –it was his field– and sent people over to confiscate it. It was strewn with ancient gravestones, with loads of gold in the ground. A lot of Greeks who wanted to open up the graves without drawing attention, would built leantos during the night and open them up. A lot of them found gold and jewellery in there. Chatzidimitris, my grandfather, had found a gold wedding ring and turned from a poor worker to village bigwig. Close to the beach there was this hill, and the ancient city lay on top of it. You’d find broken roof tiles, ancient cisterns and loads of dry wells there.

To the south, less than an hour away, lay Közbeyli. A small village, with about a hundred houses, most of them Turks. The Turks leaved on the east side of the village, the Christians on the west, separated by a street. The village lay on a hillside. About a quarter of an hour away from it there lay a canyon full of trees. Loads of good, clear water sprang out ther. We’d go do our washing there. To get to the canyon, we had to go through their village streets.We didn’t have much to do with the Közbeyli people. They’d frequent Gerenköy, which was closer to them, they were most in contact with them.

Two hours to the east of us (NE 7km) was Samurlu, on a hillside, you could see it from afar.Samurlu had more than a hundred houses. Only Turks lived there. They all went down to Alıağa to shop. The Phoceans (from New Phocaea) would go to Samurlu most every day, to sell tomatoes, leeks, and other garden vegetables. We didn’t. We only went if we wanted to by a goat, say, or an animal, on rare occasions. Some of us who owned farms and filed around there would go into Samurlu to find workers.

Commercial Relations and other info on Finance

All that the women might need for the house –matches, petrol, rice, potatoes, small stuff that is– they could buy from our village shops. The rest we’d have to go pick up at the stores in New Phocaea on Sunday mornings. They were cheaper there. The village was surrounded by fields belonging to the Phocaeans; they’d come and shop in our stores. And every evening they’d gather in our coffee houses, more than 15 Phocaeans at a time. Some of us used to go to Alıağa tos hop for wheat and shoes. And every Monday there was an open-air bazaar in Menemen. Our farmers would go sell cheese and butter and buy other stuff. If someone fell ill, you needed to go to New Phocaea by horse and summon the doctor. If you had a toothache, the village barber would extract it with a pincer. At the beginning of the village there were two shops –grocery store and coffee place together. One belonged to Gamitros, the other to Giahnis. There was a third coffeeshop in Seouti (the village mahale),which belonged to Konstantis. We had two shoemakers, they’d import work footwear, we called them tsismedia. They were made of soft leather and reached up to the knee. We wore them because they were comfortable and because there were snakes around. You couldn’t go anywhere without them, there was tall herbage everywhere. Jewish peddlers from Phocaea would come sell us textiles. They sold them twice the regular price so most of us would go to Phocaea ourselves to buy them. We’d go to Menemen to shop us well, if some other errand took us there. Our grocers would go to Izmir to shop. On boats. (PAGE 109 MISSING)

If you got a headache, the women would exorcise it with home remedies. They’d put some water in a shallow tray, break an egg in it, then sprinkle some chasteberry leaves and say some words. Then they’d take the tray up to the roof so that the stars would see it. Early in the morning, befroe sunrise, they’d empty the water from the tray on your head, little by little, together with the chasteberry leaves, and your headache would leave you. The egg was like it had been baked. Only a few knew how to work these things. They called them “yities” (charms)

In the winter of 1914, the village heads were sent some sealed envelops. Open them only when you’re told to do so, the message went, or we will kill you. In Çakmaklı we had a village head called Kourelas. “I’ll do what I want, he said, and I’ll open it” He did. And it wrote inside: “Kill and loot”. They’d been a mistake and they had sent to us the envelop that was supposed to go to the Turkish head of Közbeyli. Kourelas went around the village bearing the news but we didn’t believe him. But in a little while the Turks came, stole our animals, beat up our shephers, Turkish women came and stole, looking for money. There was a rumour for a general pogrom. When we saw that indeed this is what was happening, some left and went to Phocaea, others rowed across the see to an islet called Partheni.

[Vroutanis] I was a pupil in the Phocaea school back then. They told us one evening that the Turks were to come slay us. A lot of families got together and we locked ourselves inside a sturdy house. At 3 in the morning the Turks, armed, came down from the surrounding villages, shooting their weapons. They tried to open the doors to the house, but couldn’t. When things calmed down a bit, we jumped out of the back windows and left through the empty side streets. We went to this mountain by the sea. We stayed there for 7 days and then a boat came –its name was Pinios– and took us. Those who owned boats had left earlier and managed to get to Mytilene and sound the alarm.

[Savvas] Most of us crossed over to Partheni on boats. We had no drinking water there, we had to drink the sea. We had a small boat and we would sneak out, carefully, to fill a couple of clay pots. A couple of us returned to the village to get some of their things and the çete got to them and slew them. From Partheni we went to Mytilene on small boats. And from then own we spread out, some went to Thessaloniki, some to Athens, some stayed on Lesvos.

[Vroutanis] In 1920, when we were living in Kalloni, we were told that this boat was to sail out for the homeland. We came down to the port in Mytilene, went abord and left. The boat took us to New Phoacea. From there we returned to Çakmaklı. Our village was unkept, full of wild hay and weeds,they were up to a metre high. Even wild boars had descended from the mountains.In our homes we found Turkish refugees, muhacirs they called themselves, from Macedonia. Within two days of our coming back they left, they didn’t maim the houses. The first ones from us to reach Çakmaklı, there were three of them, went into other people’s houses and took things to their own. There was no police around and no order.We cleared the ground from weeds, we put everything in order, we put our fields to working order again,but it was all very short-lived. I was recruited to the army in the beginning of 1922. My family stayed in the village until August. Then a couple of Çakmaklı residents who’d also been soldiers came back with really disturbing news, that the army was retreating. People started to panic, they’d climb up hills and mountains so that the çete would come slay them again. When they saw that things weren’t getting any better they once more fled to Partheni. The priest fled to Mytilene to the port authorities and sounded the alarm. They sent this huge kayık from Plomari and took everyone to Mytilene.

There are a lot of people from Çakmaklı here in Haidari, Athens, but in Crete and Mytilene also. 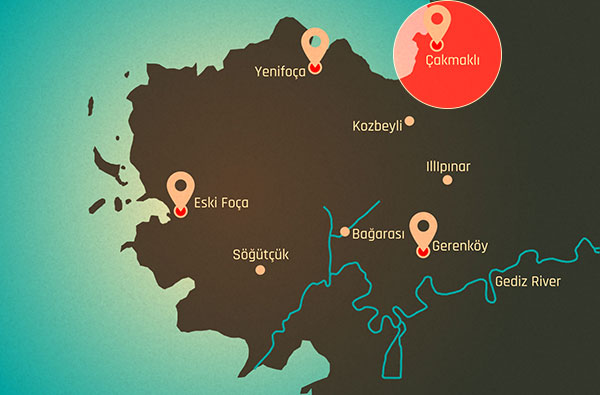