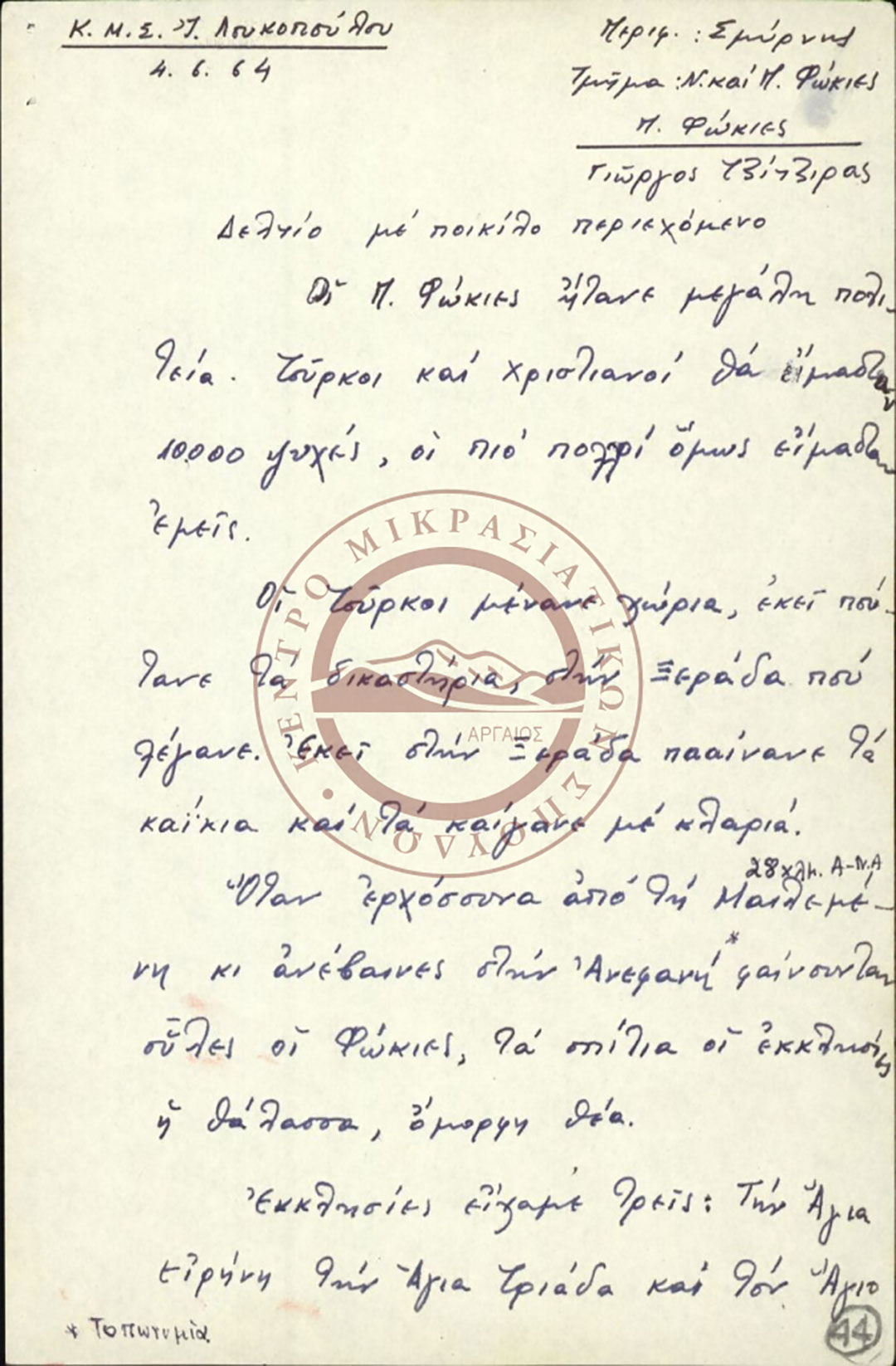 Giorgos Tzitziras was born in Old Phocaea in 1896 from Phocaean parents. He never attended school. He followed in his father’s footsteps from when he was a little boy’ his father was a shepherd and took him with him to help out with the sheep. He came to Greece for the first time in 1914, when the Greeks of Western Asia Minor were displaced. In 1919, when the refugees were returned home, he went too. And in 1922, with the Catastrophe, he left his homeland forever. He know lives in Anavyssos. He has a few fields and he lives by cultivating them. He’s married, has five children and eight grandkids. His wife is from Vari. She also gave me information on her hometown. He is a kindhearted and willing informant. I met him on 4 June 1964. Address: Giorgos Tzitziras, Georgiou Delliou St., Anavyssos

Old Phocaea was a big town. Turks and Christians together, we must have been around 10,000 souls, but we [the Christians] were in the majority. The Turks lived separately, where the Courts were, in the “Xerada” [the Dry Field]. It’s where they’d take old boats and burn them. When you were coming from the direction of Menemen and climbed up Anefani hill, you’d see all of Phocaea, the houses, the churches, the sea, a beautiful view. Churches we had three: Ayia Irene [Saint Irene], Ayia Triada [Holy Trinity], and Ayios Niolas [Saint Nicolas]. Ayios Nikolas was the oldest church, right in the middle of Phocaea. To the north, at the very edge of Phocaea, was St Constantine, the cemetary. The church was operated every now and then. There were nice graves there, with gravestones. We had another cemetery further out, St. George. Inside the town the streets were narrow, made with ancient cobblestone. Only in the east, where new houses were built, were the streets wide. They were dirt roads and had a few trees, mostly mulberry. The other streets, inside the town, had no trees. Some houses were two-storey, some single-storey, all built in fine stone,chipped, from New Phocaea. We also had quarries, but we didn’t work them. We worked on other things, we worked the salt-works. We lived off the salt. Most people had fields, mostly vineyards. There were a lot of animal farmers too. We had two schools, one for the boys, one for the girls. Old Phocaea had a good port, it was deep and it could accommodate big ships that came to pick up salt. That’s where the salt warehouses were too. Around the port it was all coffee shops. We had a central shopping street (çarşı) with all sorts of shops: greengrocers, grocer, milkshops, bakeries, all mixes. The çarşı was a long road that went from the port all the way to Mikros Gialos (Küçük Deniz). At evenings, the coffee shops were filled with people, music played too. We’d go and sip our little bottles of alcohol, we’d eat something too. Where the salt, by the warehouses, right next to the sea, there was an elevated construction called Bedenia, and underneath it was the municipal slaughterhouse. We even had a song for the Bedenia:

I fall off the Bedenia
I fall off to kill myself
and my love rushes to shout
save him, by God.

Outside Phocaea, to the north, there was the Marmarogourna. It was all vineyards there. After the Marmarogourna were the mountains and then the area called Mersinakia. We’d gather early grapes from Mersinakia; there were loads of olive trees there too. There was also a smaller port there and a tiny coffee house. That’s where we left from in 1922, with the Catastrophe.

I was a shepherd. Our animals would graze in the filed by the river Gediz, near Maltepe. There were a lot of willow trees there, so many, until the eye could see, and plane trees too. That’s where we heard that the Turks were going to kick us out. Every Monday we’d take tulum cheeses to Menemen; we saw that things were turning ugly. We took off all collars and bells from our animals and dropped them in the woods. Then we took the animals up to a mountain, on top of the Tserkezika aera, and hid them. There was a lamb that cried for a whole week; the dogs howled.–That’s not a good sign, my brother says. One evening my brother and I were sitting together, our father to the side. It was about 11pm and we heard horses galloping. About ten riders showed up, surrounded the animals.
–Throw off your cape and fall to the ground, my brother says. I take his hand and, crawling, we distanced ourselves from the herd. We left and ran to a different mountain. The main road passed under there. We sat on a branch, hidden deep in the woods, for a long time. We were so scared, we pissed our pants. We could hear their lashes going tsaf, tsaf… They were taking our flock towards Menemen. We heard the animals going by underneath our feet. They were crying and we were crying too. This year’s lambs we kept elsewhere, in a pen, they didn’t take those. In the morning we lost each other, my brother and I; we left the little’uns and ran. I went to the shed. I took ten bags of cheese, our cauldrons, and I hid everything behind a bush, in the woods. Then I set out for Phocaea. I found my brother along the way. Our father went to Menemen, to the Turks, to tell them our flock had been stolen. When he came back, he found the little’uns and brought them to Phocaea. We bumped into him by Apano Vari. We took the animals with us, he stayed in Cari. We went to Phocaea, put the animals in a stockyard. That night, around 8 to 10 pm, the Turks came. We leave everything behind, run to the mountains again. There were five, six of us, we went to a high mountain. You could hear the shooting all night, the irregulars from Illıpınar screaming. It was the end of the world. In the morning was saw a boat taking on people. We came down to the beach. A member of the gendarmerie tried to kill us.
–Hey! says my father to the officer. It’s me Barba Yiannis, your father’s friend. He took us in a rowing boat to the big ship.