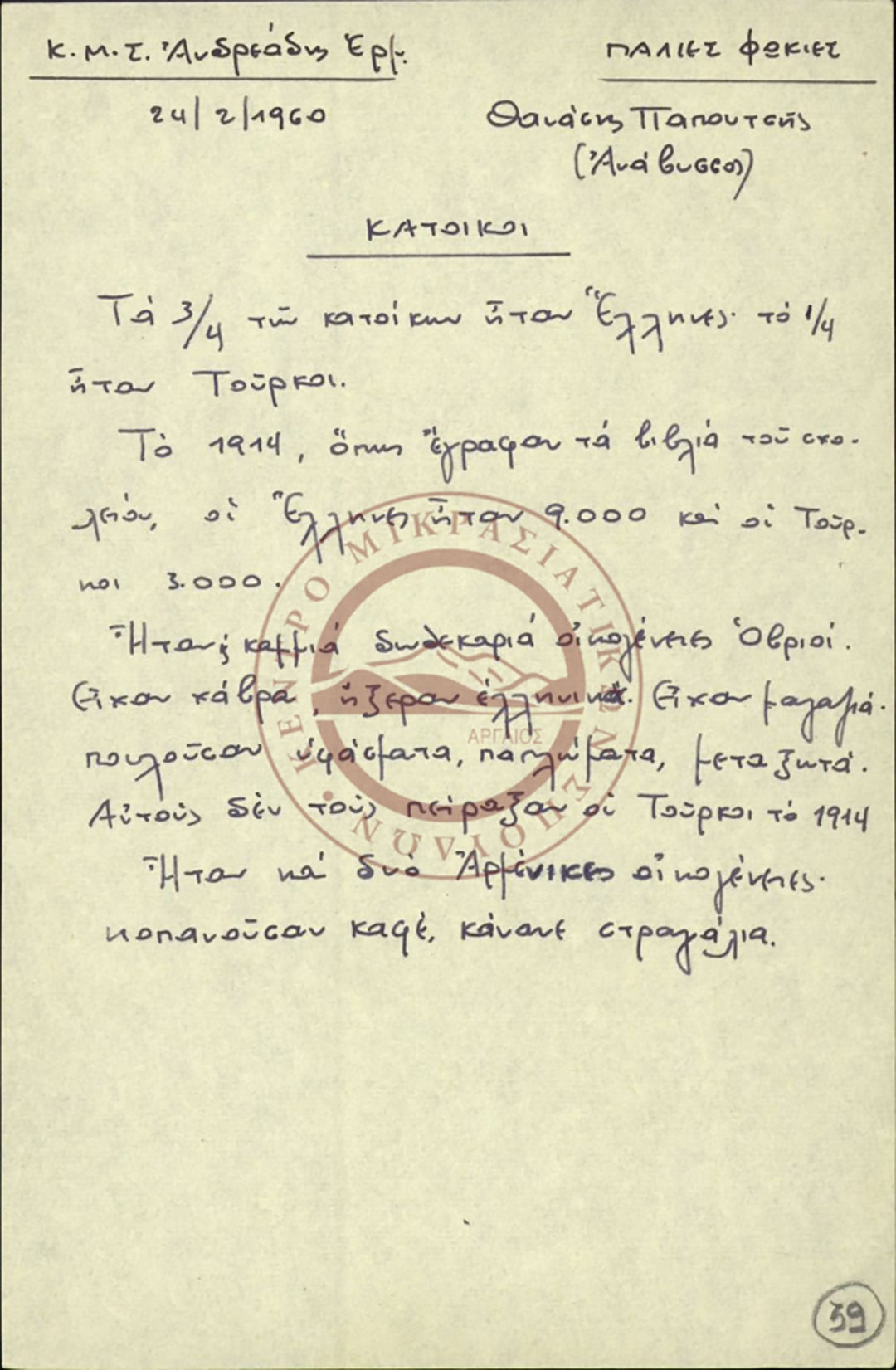 Thanassis Papoutis was born in Old Phocaea in 1896. Both his parents were also from Phocaea. His father, one of six siblings, owned saltworks with his two brothers. The other three siblings owned a different salt-mine. He attended school up to 6th grade. As soon as he graduated he started working in his uncle’s grocery store, up until 1914, the time of the first Pogrom. Together with other Phocaeans, his family fled to Mytilene (Lesvos). They first stayed in Vareia and then in Sigri. He started working for Mihales Grimanis, who owned the biggest (olive) oil tanker on the island. In 1919 he returned home, together with other Phocaeans. He started working on tobacco fields. In 1921 he volunteered for the Greek army in the Minor Asia Campaign. He marched all the way to Afyon Karahisar and Seydi Gazi, where he was injured. Still injured, he returned to Old Phocaea in 1922, took his sisters, and they fled again to Mytilene. From there they came to Piraeus. From 1922-1924 he lived with his fellow refugee compatriots in Drapetsona. They founded the “Pamfokaikos” (All-Phocaean) Club there, whose goal was the housing and financial restoration of Phocaean refugees in Greece. He himself was elected a member of the Club’s council and a committee member of the Refugee Restoration Committee, together with Chr. Karpouzis and I. Dedes (who are no longer alive). So he became one of the pioneering Phocaeans who moved to Anavyssos. His wife is from Generenköy, a village outside Old Phocaea. They have two sons, both married (one works as a chemist in Larymna) and a daughter, single. The other son helps Thanassis in the shop, which is a coffee shop and taverna, right on the paved road that leads from Athens to Sounion, and goes through the Salt Works in Anavyssos. Thanassis Papoutsis is a joyful and very smart guy-next-door. He likes telling stories and his memory recall is really strong. He is a good informant. I met him today, on 24 February 1960. His address: Fokaia, Anavyssos, Attiki

¾ of the population was Greek. ¼ Turks. In 1914, as the school books said, the Greeks were 9,000 souls, the Turks 3,000. We also had about a dozen Jewish families. They had their own synagogue, they spoke Greek. They owned shops and sold textiles, duvets, silk. The Turks did not persecute them in 1914. There were also two Armenian families, they prepared and sold coffee and roasted chickpeas.

The sea lapped against old Phocaea. It was built on a level plain, at the foot of low hills, not higher than 500m tall. The central city was inside a fortress. In my father’s era the castle gates closed and whoever was late coming in at night, was left outside. Old Phocaea was about 18 miles (44kms) away from Izmir, which is as far as Anavyssos is from Piraeus. There was a means of public transport to Izmir thrice a week. It was a boat, with tyres hung on its outside. It would take you to Izmir in 3 hours. Its route was: Old Phocaea – New Phocaea – Dikilli – Ayvalık. Then it turned around and to the same route all the way back to Izmir. If the weather was good, we’d use sailing boats to go to Izmir; it was faster than the boat. We also went to Izmir by carriage. We had 4 carriages (fayton) in Phocaea. 2 worked on one day, the other 2 the next, so that the horses would get some rest. They’d leave for Izmir in the morning, come back at night. It took them about 4 to 5 hours. When we reached Gerenköy, a village by the river Gediz, the carriage would go on a raft to cross over. Then we’d go by Sereköy and reach Kordellio (Karşıyaka). The carriage would then stop at a horse inn (hane) and we’d take the boat across, to Izmir. Menemen was 4.5 hours to the East of us, there was a paved road to there.

This happened 2,400 years ago: the Persians came to conquer Phocaea. They gave the locals a 48-hr ultimatum. The Mayor says to the people: “Do we surrender or do we leave?” “We leave, we leave” they said. They hopped on the boats. Then the priest prayed, sanctified the waters, threw his stick into the sea and said: “Whoever comes back and becomes a slave to the Persians shall be cursed.” Only the town guard stayed behind, to hand over the town to the Persians. Phocaea was left empty. They Phocaeans went by boat to different places. They ended up in Marseille. They stayed there for 1000 years. But they missed the homeland. In the meantime, the Persians had left. So they hopped on the boats again and came back to Phocaea. We are descendants of these ancient Phocaeans. No other group came en masse to live here. Every 100 years the French government would send a warship to Old Phocaea and took to France a Committee of Phocaeans, to commemorate the date of the founding of Marseille.

In 1912 this French company came and started digging. They found some ancient marbles, 4-5 tons of them. They lifted them from the ground with cranes. They were looking for the Temple of Athens. But they found small and bigger pots, antiques. We also looked in the fields. For every ancient jar we found, the French would give us 4 piastres. This one man found in his vineyard a pot with many ancient coins in it. He then built a house which cost him 600 golden liras.

Here in Fokaia, meaning in Anavyssos, there are 94 Phocaean families. But most Phocaeans are in Halkidiki, on the Cassandra peninsula. They have their own village there, with 200 families. They are farmers. There’s also 50 families on Crete, in Herakleion.

Those Phocaeans who managed to escape the second persecution in 1922, went to Mytilene, to Chios, to Volos, Thessaloniki, Halkidiki, and Crete. Others went to Athens and Piraeus. In Piraeus we used to live in an area called Drapetsona. We established the “All Phocaean Club” whose goal was to re-establish the Phocaean refugees in Greece. I was a member and a representative to the Reparation Committee, together with Xadjikarpouzis and Dedes. In the meantime, some of our compatriots started working in the Anavyssos saltworks. The company who owned the Works hired them because they knew about saltworks from Phocaea, they worked there. One day there came to Drapetsona a three-member committee from the company and said that the 40-50 workers working on the saltworks were
very happy and we should also move there. So 10 families, we went into small boats and sailed to Anavyssos. We liked the place. We put up 15 tents on the beach. That became our base. After 15-20 days we went back to Passalimani in Piraeus, hauled on the boats 100 tents more and we all left Drapetsona for Anavyssos. This was in 1924. For 14 months, 100 families lived on the beach in tents. During this time we suffered everything imaginable. The place was a swamp. Jackals would come into our tents, snakes too. To survive, people would uproot cut trees and turn them into coal. The place we were living on belonged to the Petraki Monastery and was managed by the Kalyvia Co-op. In 1926 the Ministry of Argriculture finally gave us the place for ourselves, after our requests for Reparations were approved. We are a total of 86 allotment holders and they gave us 10.6 acres of land. On top of the savagery of nature, we had to face the cruelty of people too. The Albanian-speaking villagers from Kalyvia didn’t like us one bit. On night, some ten of them got drunk, took their weapons, hopped on carriages and wanted to come to Anavyssos to throw us to the sea… Along the way someone who was from the same clan stopped them and convinced them to go back.