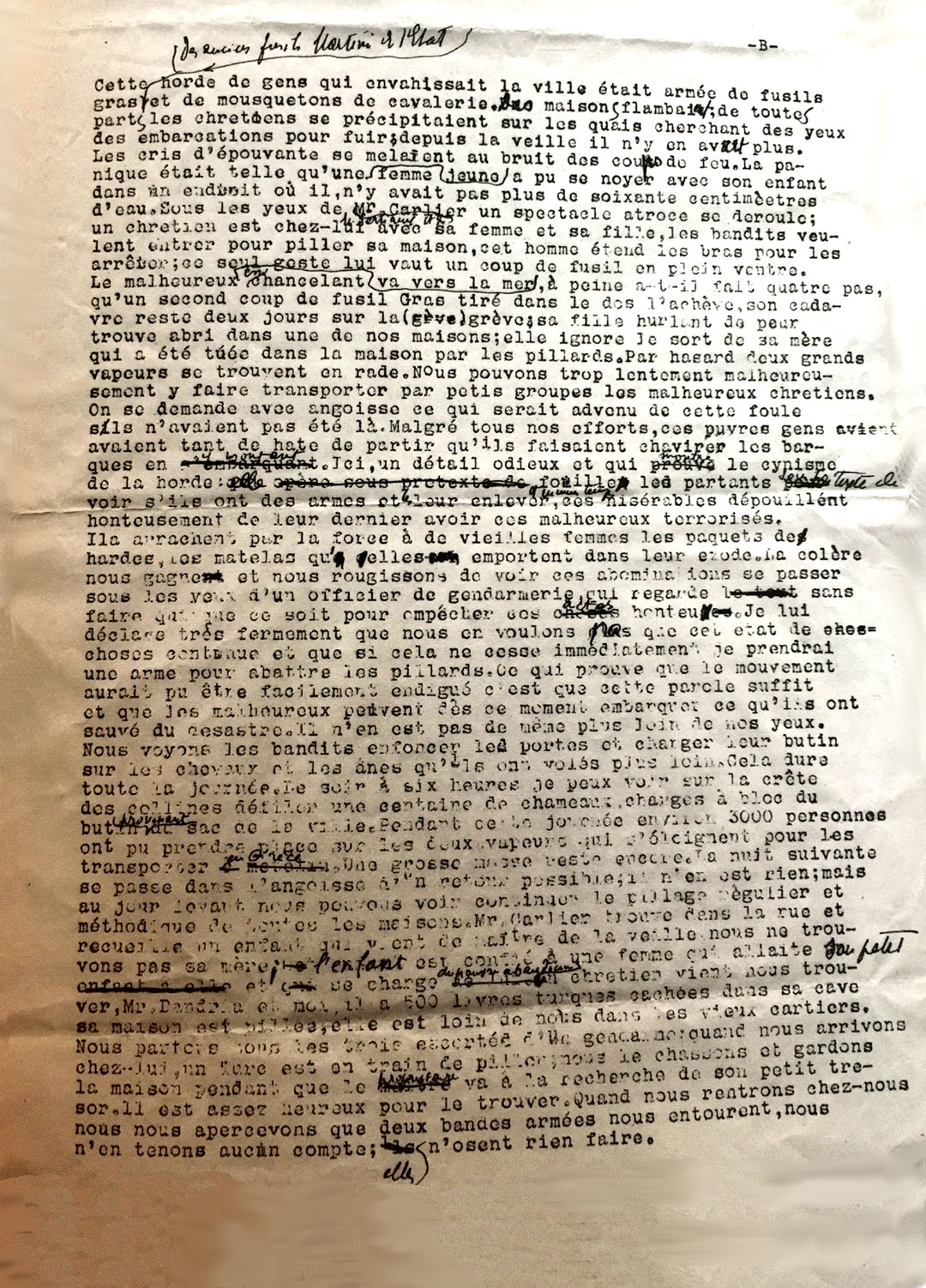 This horde of men invading the city was armed with gras rifles, old Martini rifles, and cavalry muskets. The houses were burning; from everywhere Christians were fleeing towards the quey, looking out for boats to flee with; since yesterday there was none to be found.

Cries of dread got mixed with the clutter of firing shots. There was so much panic that a young woman managed to drawn together with her child in a depth of no more than sixty centimetres of water. In front of Mr. Sartiaux and Mr. Carlier’s eyes, an atrocious spectacle was unfolding: a Christian was at home with his wife and daughter; the bandits wanted to enter the house to loot it; the man opened up his arms to stop them from entering; this simple gesture earned him a rifle shot in the gut. The retched man stumbled towards the sea, he had hardly managed to take four steps, when a second shot from a Gras rifle got him on his back; his dead body has remained now for two whole days on the strand. His daughter, who screamed with fear, found shelter in one of our houses. She is unaware that her mother was murdered in their house by the looters.

By chance, to great steam boats were waiting offshore. We managed, alas very slowly, to transport the unfortunate Christians to them, in small groups. One wonders what would have happened to these people had the boats not been there. Despite all our efforts, these poor people were in so much haste to leave that they kept capsizing the boats as they were climbing onto them. Here, a heinous detail which shows the cynicism of the horde: those fleeing, followed under the pretext that they carried weapons which had to be taken from them, these miserable creatures were terrorised and shamefully stripped from their very last belongings. They forcefully snatched packets from old women, or the mattresses they were carrying with them to their exodus. Anger took over us and we were ashamed to watch these abominations happening right in front of the eyes of an officer of the gendarmerie, who sat and watched without doing anything to stop this shameful acts. I told him very firmly that if this state of things continued and if it did not stop immediately, I would pick up a weapon to fight the looters myself. What proves that this whole things could have been easily curbed is the fact that these simple words sufficed, and that the miserable men and women were left to take with them anything they had salvaged from the disaster. The same did not happen a little further away.

We saw the bandits force in the doors and carry their booty to the horses and the donkeys they had stolen further afield. This kept on for the whole day. In the evening, at 6, I saw on the crest of the hills about a hundred camels, carrying away the booty from the looted town. During that day around 3,000 people managed to find a place aboard the two steam boats, which then left to transport them to Greece. But a large number still stayed behind. The night passed in agony, hoping that the boats would return; they didn’t. But with the first light of dawn we could discern that the looting of all houses continued regularly and methodically. Mr. Carlier found and picked in the street a child that had just been born the previous day, but whose mother we could not locate. We confined the child to a woman who was already breastfeeding and she took charge of the poor abandoned creature. A Christian came to find us, Mr. Dandria and myself, he had 500 Turkish liars hidden in his cellar. His house was looted, it was far from us, in the old quarter. All three of us left, escorted by a policeman. When we arrived at his house, a Turk was looting it. We chased him away and guarded the house whilst the owner went to look for his small treasure. He was happy to find it. When we returned to our homes, we realised that two armed groups had surrounded us. But we paid no attention; they wouldn’t dare do anything.