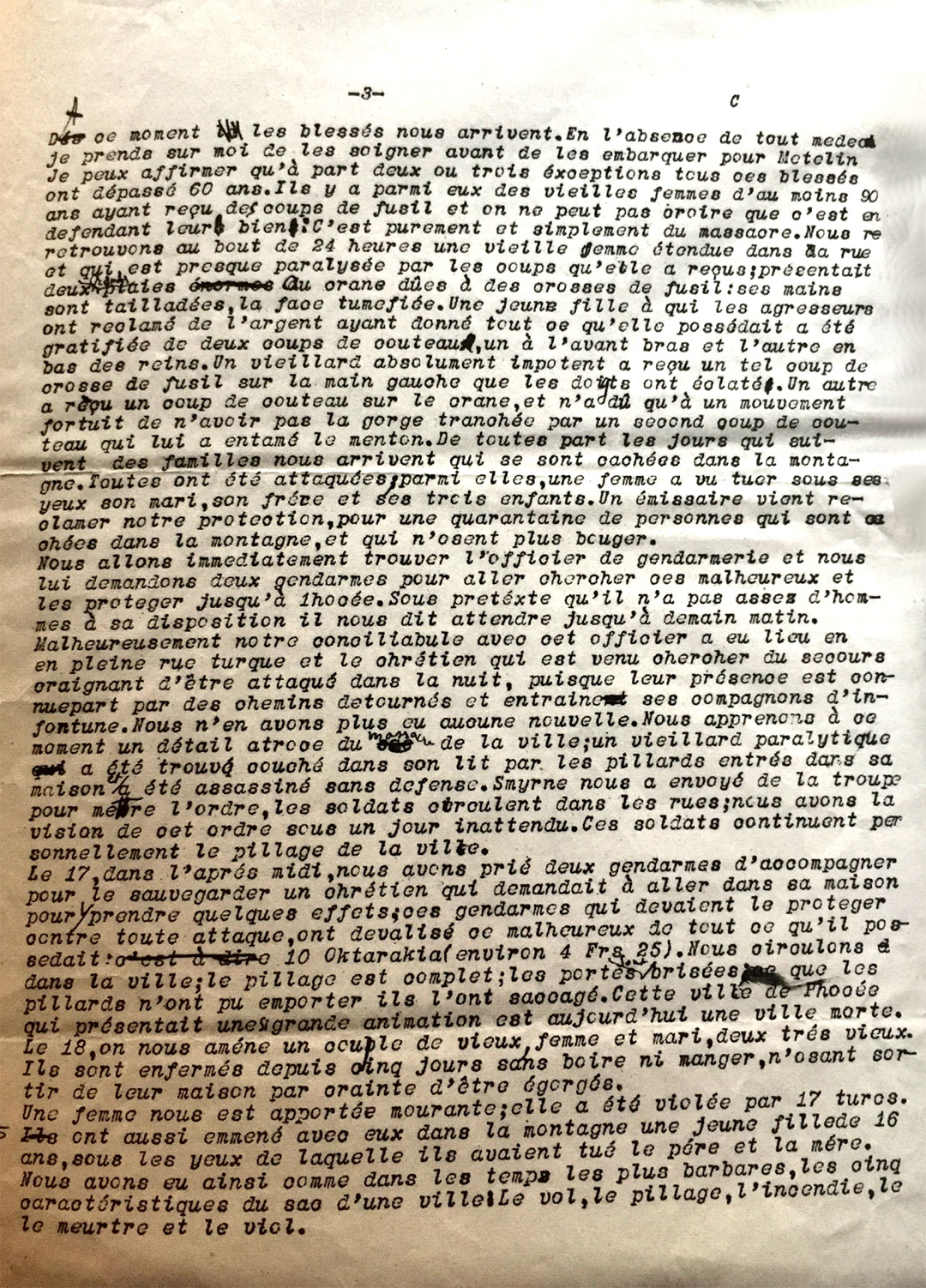 At that moment, the injured started arriving on our doorstep. In the absence of any doctor, I took it upon myself to nurse them before putting them on a boat to Mytilene. I can confirm that, apart from two or three exceptions, all the injured were over 60 years old. Among them there were old women over 90 who had been shot at, and it can’t have been because they tried to resist. It was simply a massacre. After 24 hours we find lying on the street an old woman who was almost paralysed by the beating she had received; she sported two large wounds on her head, made by rifle butts. Her arms were slashed, her face swollen. A young girl, from whom the aggressors had sought money, after having given them all she had, had been thanked by receiving to knife cuts, one on her forearm, the other down her back. An completely invalid old man had received such a hit with the butt of a rifle on his left hand that all his fingers were broken. Another had been cut with a knife on the head and had only by chance escaped having his throat cut by a second cut that started on his chin. In the coming days, families from all over the place started arriving; they had been hiding in the mountains. They had all been attacked. Amongst them, a woman had watched her husband, her brother and her three children being killed in front of her eyes. We sent an emissary to assure the forty or more people who were still hiding in the mountains, not daring to come down, that they had our protection.

We immediately left to find the officer of the gendarmerie and asked him for two policemen to accompany us, to go and look for those retched up in the mountains and accompany them to Phocaea. Pretending not to have enough men available, he told us to wait until the next morning.

Unfortunately our discussion with the officer took place in the middle of the Turkish street and the Christian who came to find us and ask for our help, fearing that they may be attacked during the night now that their presence was known, left by roundabout ways so as not to lead his companions into misfortune. We never heard of them again. We learned then of an atrocious details concerning the massacre that befell the city: a paralysed old man was found on his bed by the looters who broke into his house and he was murder without putting up any fight. A troop of soldiers was sent to us from Smyrna to restore order; the soldiers went around the streets. We saw this order in its proper light: the soldiers continued the pillaging themselves.
On the 17th, in the afternoon, we asked two policemen to accompany a Christian who wanted to go home and salvage some of his things. These police officers, who were supposed to protect him from any attack, robbed the retched man of all he possessed: 10 Oktaria (almost 4 francs 25). We went around town. The looting had been completed. The doors were broken down. What the looters could not carry with them, they had ravaged. The city of Phocaea, who was once so vibrant, is today a dead city.
On the 18th, they brought as an old couple, husband and wife, both very old. They had been locked in for five days without food or water, not daring to leave their home by fear of being slaughtered.

They also brought us a dying woman. She had been raped by 17 Turks. The Turks took with them to the mountains a young girl of 16, after having killed her mother and father in front of her.

Like in more barbaric times, we had before us the five characteristic traits of the rampage of a city: fleeing, looting, burning, killing, raping.