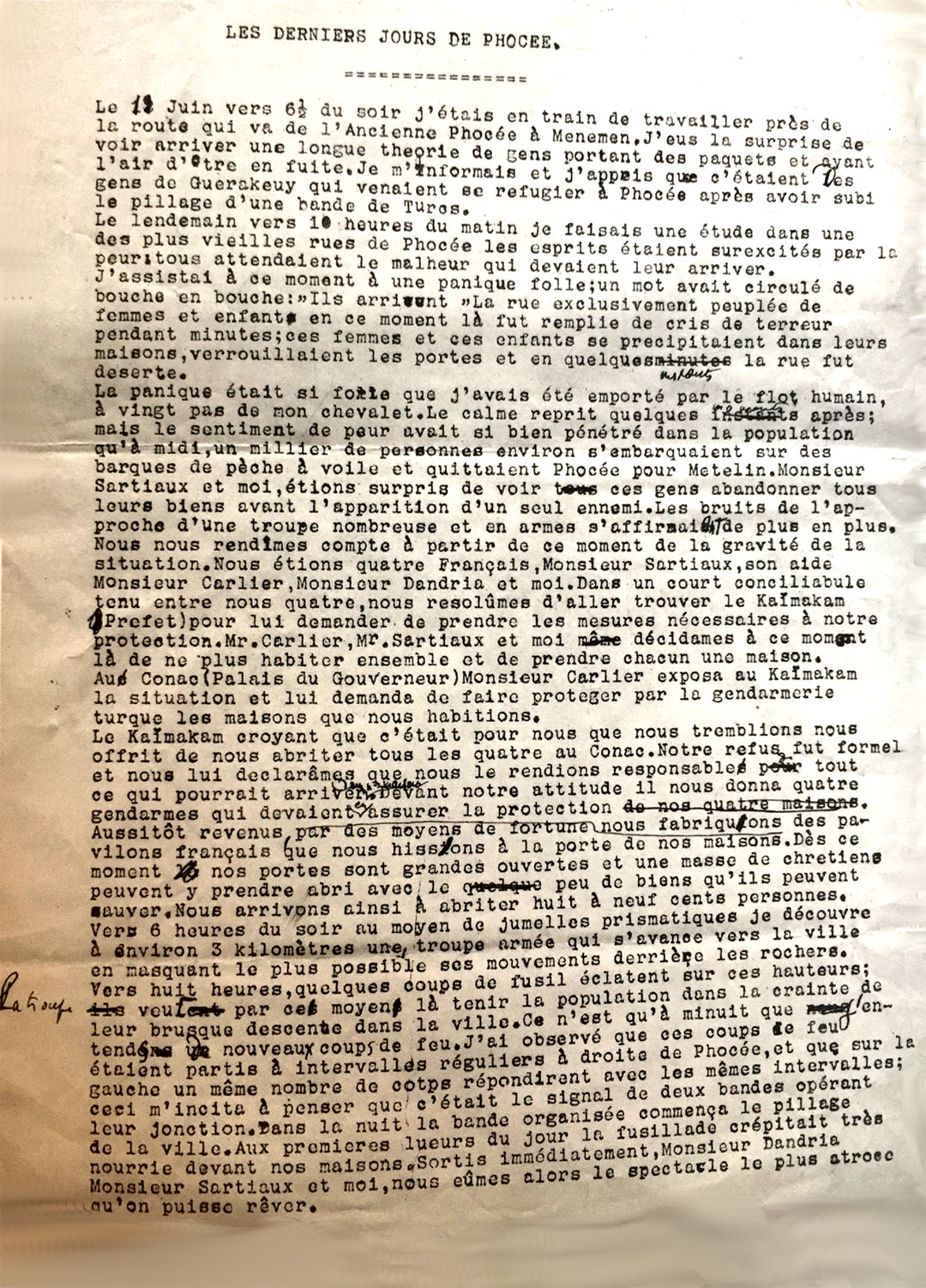 THE FINAL DAYS OF PHOCAEA

The 11th of June, at around 6.30 in the evening, I was working close to the rout that goes from Ancient Phocaea to Menemen. I was surprised to see a long line of people carrying packages, who appeared to be fleeing from something. I asked and found out that they were the people of Gerenköy, who were coming as refugees to Phocaea, having had their village looted by a group of Turks.

The next day, at about 10 in the morning, I was sketching in one of the oldest streets in Phocaea. People’s spirits were inflamed by fear; everyone awaited the tragedy that was about to befall them.

At that moment, I saw crazy panic spreading: a word was going from mouth to mouth: “Theyre coming!”. Within minutes, the street, exclusively people by women and children at that time, became filled with cries of terror. The women and children rushed to their houses, locked their doors, and within just a few minutes, the street was completely deserted.

Their panic was so strong that I was carried off by this wave of people, twenty feet away from my easel. A calm descended again a few moments afterwards, but the feeling of fear had so penetrated the population that at midday, about a thousand people had already embarked on fishing sailboats and left Phocaea for Mytilene. Mr. Sartiaux and I were completely surprised to see these people abandon all their belongings before any enemies had even appeared. The noises of a numerous and armed group of men started becoming more and more clear. At that moment we understood the gravity of the situation. We were four Frenchmen, Mr. Sartiaux, his aide Mr. Carlier, Mr. Dandria, and myself. We deliberated among us four and we resolved to go find the Kaymakam (Prefect) in order to ask him to take all necessary measures to protect us. Mr. Calier, Mr. Sartiaux and myself decided in that moment to stop staying together and go each to a different house.

At the Konak (the Governor’s House) Mr. Carlier explained the situation to the Turkish Kaymakam and demanded that he sent the Turkish gendarmerie to protect all the houses we were staying in.

The Kaymakam, thinking that we were afraid for our own wellbeing, offered to accommodate us all in the Konak. We refused, very formally, and we declared that we would be holding him responsible for everything that might happen. Faced with his attitude, he offered us four gendarme who were responsible with assuring our well-being.

As soon as we returned, we created, with whatever means possible, French flags which we hoisted outside the doors of our houses. From that moment on, our doors remained wide open and a mass of Christians could find shelter with us, with whatever little they could salvage. In the end, we sheltered eight to nine hundred people.

By 6 o’clock in the evening, I looked through prism binoculars and discovered that at a distance of about 3 kms from us, an armed group of people was advancing towards the city, trying to hide its movements as much as possible behind the rocks. By 8 o’clock, I heard shooting from high up the hills: it was the group’s manner of holding the population in fear of their imminent descent towards the city. It wasn’t until midnight that I again heard shots anew. I observed that those shots were fired at regular intervals from the right hand side of Phocaea, only to be answered, at the same regular intervals, from the left. This made me think that it was a signal between two groups, operating together. During the night, this organised group started looting the city. At the first glimmer of dawn, the shootings came very near us, in from of our houses. Immediately, Mr. Dandria, Mr. Sartiaux, and myself stepped out, only to be confronted with the most atrocious spectacle anyone could imagine.