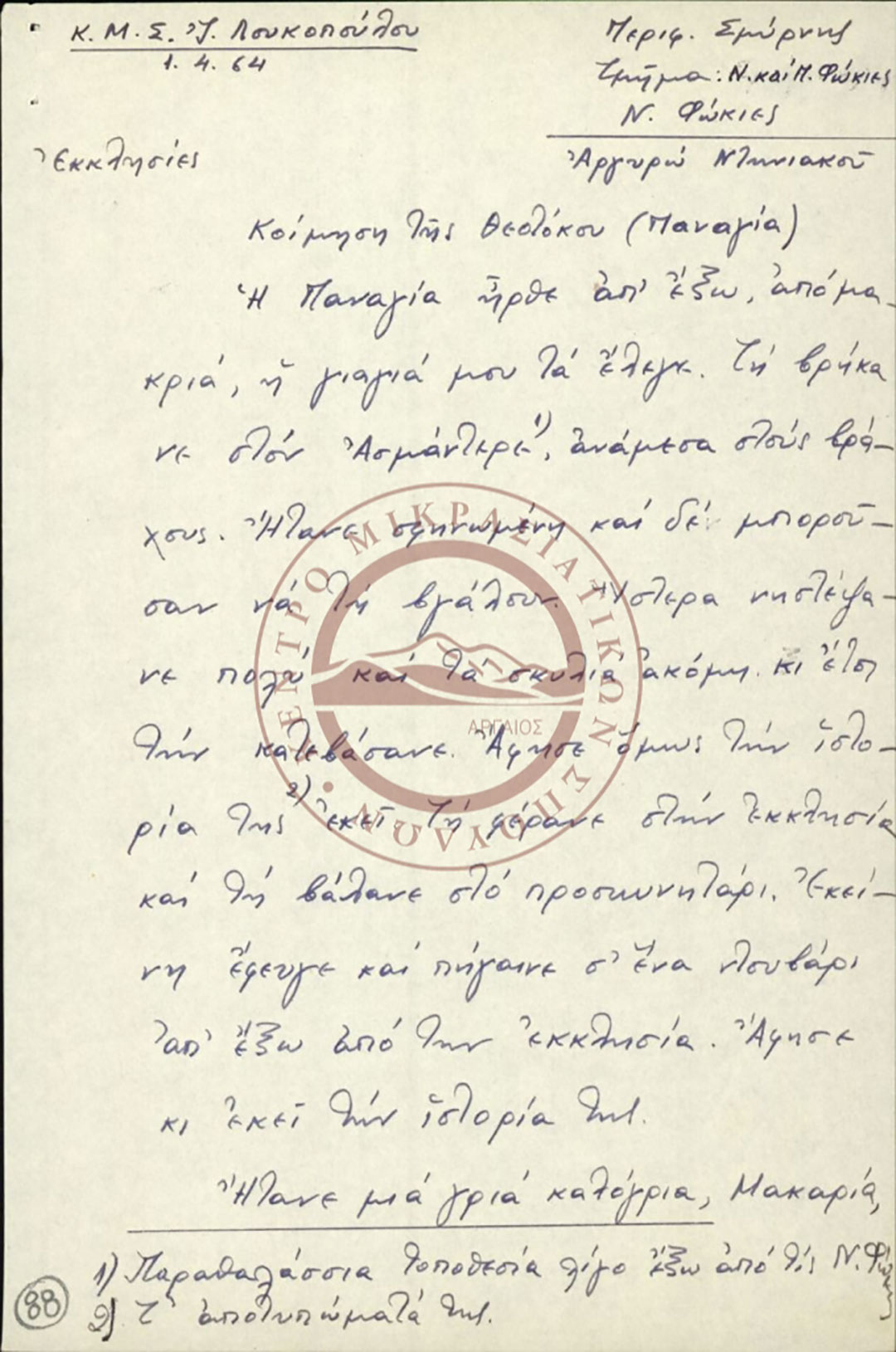 Argyro Diniakou was born in New Phocaea in 1875. Her parents were also from New Phocaea. Her father was a farmer. She finished grade school in her hometown. In 1900 she married a man whose family came from Tinos. She had four children but now she only has one. The rest all died when adults. She came to Greece first in 1914. Then, with the pogrom, they fled to an islet opposite New Phocaea. From there they were picked up by a ship, which took them toEressos (Lesbos). They settled in Mytilene and in 1919, with the Return of the refugees, she went back home. She stayed there until August 1922 when, with the Catastrophe, she fled again to Mytilene. Then, with other New Phocaeans, she settled in Crete. When her son completed his military service, he went to Crete and took her to live here with him. In the beginning they lived in the neighbourhood of Liosia, then in Chaidari, where they still live today. Despite her old age, her memory functions well, but her interests focus primarily on religious topics. I met her on April 1st, 1964.
Her address is
Argyro Diniakou
Vas. Freiderikis 37
Chaidari (Streetcar: Chaidari Central) Final Stop

The [icon of the] Virgin Mary came from far away, my grandmother said so. They found it in Asmadere [a seaside place outside New Phocaea], in between some boulders. It was stuck there and wouldn’t budge. So they fasted a lot, even the dogs did, and they managed to get to it and bring it down. But it left a story [an imprint] there. They brought it to the church and put it on an icon stand for worship. But the icon would move by itself and rest against a wall, outside the church. It left its story there too. There was this nun, Makaria was her name. If she didn’t light the candle in the Holy Crypt, The Virgin Mary would beat her at night. They ruined the church afterwards. Whoever had houses around it, they gave them up so that the church could be built bigger. I was 15 years old then. [The informant is now 90 y.o. so the church must have expanded around 1890]. They brought craftsmen from Smyrna for the construction. It was all made out of stone, women and children would bring in the stones from the mountainside. The craftsmen would say that Mary herself would come and build it all night. They built it beautiful, big, with columns. Now there’s not a stone left. They say that the icon of the Virgin Mary was painted by St. Luke himself. It was a big icon, made out of silver and gold leaves. When we left in 1914 we didn’t have time to take it with us. When we came back, in 1920, it wasn’t there. Karagligoris –who was in the committee– asked a Turk, Mustafa Bey: – Fine, you took the oil lamps, but what happened to the icon of the Virgin? – Καyıp, bitti [lost, göne], it stayed with us 5-6 days then we lost it. The icon was truly miraculous. One time there came this man from Mytilene with his son, who was crazy. The man had brought his son to spend 40 days inside the church. We were kids back then and we would go tease him. One day, the crazy man saw the Virgin Mary and shouted: – Stop, Mary, so that I may catch you! Virgin Mary left and went into the altar area and the crazy man fell in front of the gate to the altar. Then he was cured. I saw it with my own eyes.

My father and two other Phocaeans gave two cows to a Turk and bought the whole place up. Then they distributed little plots around, and that’s how Çakmaklı got established as a village. These three were brothers at heart and did all sorts of good deeds, they married off three poor young girls too. They wanted to build a church too, but the Turks wouldn’t aloe it. So they said they wanted to build a “papaz evi” [priest’s house], they were given permission, they built it and turned it into a church. Untilwe left, this was their only church. It was consecrated to St. Constantine. It had a very valuable icon too. Those from Çakmaklı managed to bring it with them here, in Chaidari.In Çakmaklı there lived both Phocaeans and foreigners, from Mytilene. 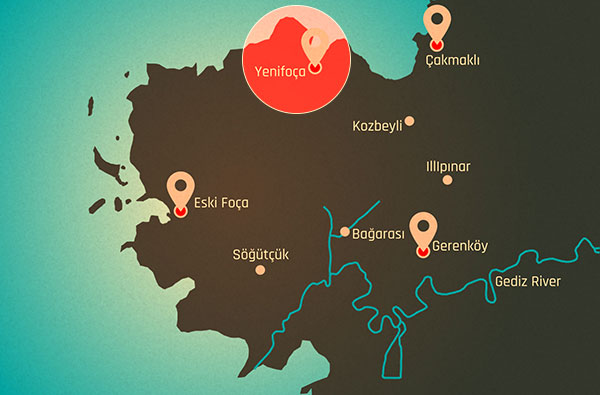