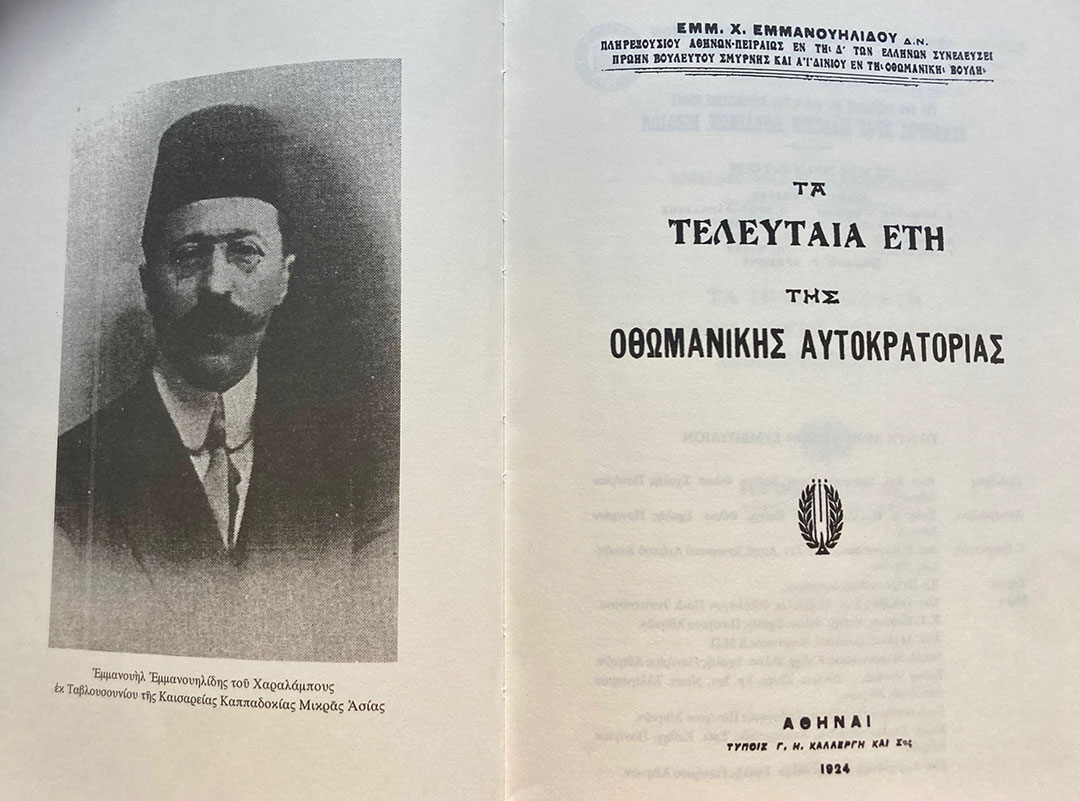 THE FINAL YEARS OF THE OTTOMAN EMPIRE

by EMM. CH. EMMANUELIDI
Member of the Ottoman Parliament for Smyrna and Aydın

Talat returned from Smyrna, where he completed the destruction he had supposedly gone to prevent from happening.  He invited the deputies to a meeting in the main Parliament Chamber.

Regarding the deportations, he repeated what he’d said before, he explained the measures he’d taken and thanks to which, he said, order was fully restored –and if not yet,  soon. When asked if the boycotts would continue, he avoided answering. He then spoke of Vurla [Urla]: “A beautiful city” he said; “a piece detached from Greece and transplanted to Asia” – words which implied that a calamity might be planned for this flourishing Greek city on the Smyrna Gulf. Returning to his favorite topic, the potential agreement with the Greek government over an exchange of populations, he advised the deputies to have confidence in his government and not to bring the issue to the Parliament.

What else could our deputies do but to bring the issue to the Parliament in the form of a question? A written question was submitted to the Speakers’ Committee on 18 June.

The debate took place on 23 June, at noon. The Grand Vizier  and the Minister of Internal Affairs were present. What had been foreseen, duly followed: The chamber became a pandemonium.

This infernal noise naturally ceased when Talat took the podium. He said that the Greeks’ emigration started from Thrace, where they’d feared retaliation for the excesses they had committed against the Muslims. “The same situation has arisen” he said “in the province of Aydın, where in some places murders and lootings have taken place. But measures against the boycott have been taken and officials have been ceased. The two governments have, therefore, set up commissions to oversee the exchange the properties of those who have emigrated from both sides, as well as those who will emigrate later voluntarily.”

The Minister’s speech called for an answer; your hereby correspondent wished to answer him.  Others who had co-signed the question also asked for the floor. The Speaker insisted that it was impossible to allow a follow up discussion. The Chamber took on an ominous atmosphere, and in the middle of this new pandemonium the Speaker was heard shouting a question –whether the discussion had been enough– and proclaiming by himself that it had been, indeed, considered sufficiently discussed  “by a large majority”. At the same time he ordered a break, for the deputies to calm down. At that very moment, M. Soudis (MP of Lazistan) had taken M. Phytos (MP from Gellibolu) by the throat; the Prime Minister was shouting “Do not act like this, they will slaughter you all!”, and M. Haydar (MP from Manisa) was raging from his high-up position as Secretary, holding up various documents, shouting that he held the evidence of the crimes allegedly committed by the Greeks.

A few days later, an envelope containing a petition by the city of Vurla [Urla] to Talat was received by mail. The report began by addressing him as “Benefactor”; within it, the Metropolitan of Ephesus, writing on June 28, was asking that the letter be submitted to the Minister. It was delivered by a member of the Parliament. After 2-3 days, Talat replied. “The people of Urla are right; I have given appropriate orders; no one shall be assaulted.”

Celâl Bayar was at the time the Izmir leader of the governing Committee of Union and Progress party. Much later, he became the 3rd President of the Republic of Turkey.

Emmanuil Emmanuelidis was the Member of Parliament for the province of Aydın (where Phocaea and Smyrna belonged). He was an Ottoman Greek, elected with the C.U.P.

Talaat Pasha was the Minister of Internal Affairs from 1913 until the end of WWI. Together with Enver and Cemal pashas, He was one of the “Three Pashas”, the triumverate that essentially ruled the Ottoman Empire at the time.